May 3, 2014 in Chinese Interest for Properties

The Deputy Minister of Development Mr Notis Mitarakis had a meeting with the CEO of the Chinese company James Zhao.  [google-translator]

The Chinese company Rao Design is planning on entering the Greek Real Estate market, focusing especially on Attica, with the aim of creating a luxury residence area, in order to sell it to Chinese citizens, using the law measure of taking residence permit.

The company’s interest was mentioned on Tuesday by the CEO of “James Rao” company to the Deputy Minister Mr Noti Mitarakis during a meeting they had.
During the meeting, the Chinese people made clear the fact that they are interested first of all in the Basin of Attica, but without mentioning specific areas or the size of the project that they are planning (budget, capacity, etc).

The made it clear though that they are more interested in areas and municipalities adjacent to the seafront. This means that they may be interested in creating building complexes both for people who want to spend some time in Greece and for permanent staying in Greece.

As it was explained to Mr Notis Mitarakis, the most important factor that affected the Chinese interest is the famous new law offering a five-year residence permit to non-EU nationals who acquire property in Greece with value equal to or greater than 250,000 euros.

We remind you that the first law was talking about 300,000 euros. However, the amount was thought to be large, so the bar descended to 250.000 euros. People of the Ministry of Development support that it is the first case of a large foreign company of the wider area of real estate that demonstrates its interest in response to the law measure of receiving a residence permit for buyers of properties that are going to be built.

Profile of JAO Design International Company
The company RAO Design International (www.jaodesign.com) was founded in New York in 1984 and has conducted over 1,000 projects in China. These include the ecological skyscrapers’ complex of Shishi Yangneiting (424.000 sqm), the settlement Seaview Gardens in Quanzhou, the complex of Fujian Province (over 300 houses in 680 acres), investments in the central part of Yueqing city, Zhejiang Province (18.2 km ²). Also, the company has received more than 100 awards in China and internationally, including the 1st Palm d’Or of Asia Pacific Hospitality Design Competition for the hotel Xiguan Hutong Courtyard (2012), the UN-Habitat Dubai International Award for the renovation of Hohhot Islamic Street (2008), and the Grand Prize for the planning of Huayang New City (2006).

Factors of the Real Estate market believe that the measure granting a five –year residence permit to real estate buyers of equal or more than 250,000 euros properties will attract Russian and Chinese buyers, and as it is believed to be , it will not only promote the sector of cottage properties. That is because the intentions of the construction companies, real estate companies and brokers, are also to promote main residence from the huge amount of unsold new apartments that have been accumulated during the years of the crisis. 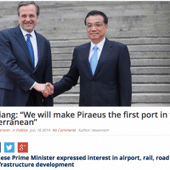