New hotels, historic shops changed hands over hundreds of thousands of euros and real-deals trading with huge price in Santorini that doen not meet any crisis instead welcomes many gold deals.
Santorini, along with  Mykonos , is the second Greek island where the crisis does not catch harbor. Money flows unlimited and both Greeks and international investors investing in the caldera island, without carrying about the situation of the rest of Greece. New hotels, historic shops changed hands over hundreds of thousands of euros and real-fillets trading with hefty price in Santorini that exorcises the crisis with gold deals. Russian, Chinese, German and British invest in the island mainly in real estate and hotels.
Despite the high cost of leases, for example for a small empty commercial shop of 40 sq.m. to 60 sq.m. someone has to pay in order to get the “rights” from 200,000 to  300,000 euro while for spaces of more than 200 sq.m. its price even reaches 1 million. euros just to be able to rent the place. But the dizzying amounts in no way deter potential investors, since the rapid returnof income th ehigh profitability  and the prospect of large profits regarded just like  Mykonos, are for granted.

“What is it that makes the love lasts forever?” Said Tom Robbins in Woodpecker. Everyone who loved Santorini loved forever. Thanks to this love, then, investors around the world investing into small projects of tens of millions value.

How much sells the brand name Santorini seen from US investors decided to open the first restaurant of the famous international chain McDonald’s in the Cyclades and in particular at a central point of Fira. An investment reached 500.000 euros. It is said that local businessman tried to explain to US investors that the hamburger and fries will not have much demand, but the clients told him that “the only thing we care about is to have the McDonald’s name in Santorini.”

The locals say Santorini has a heart that beats loudly and vibrates mountains, land and sea. Perhaps it is the heart of the volcano which is coordinated with that of Santorini, but also by the thousands of tourists who crowd the island every year. The majority of Chinese who go there either to marry or to immortalize the most beautiful sunset in the world.

The investment appetite  of the Chinese has been triggered by their own people, who already have bought small properties instead of hundreds of thousands of euros turning them into small hotels.
According to reports, the Chinese investment group Anbang Insurance Group Co, through representatives and partners negotiate the purchase of land tens of acres worth 10 million euro for luxury housing and a 5 star hotel.

Plus, the Greek Santorinian Investor , Kostas Dimitrokalis  has invested 10 mil. Euros last year, while preparing to spend another 5 million this year at the luxurious «Aqua Blue» at the beach of Perissa and at the new project at Kamari beach.

Also in the Akrotiri area Greek  businessmen George Akrivos and Nick Tsikonis have invested at least 5 million euros in the creation of the hotel ‘Ampasantor “which features suites with private pools, ready to host the thousands of  of Russian and Chinese visitors who will visit the island .

One of the most hot business recorded this time in the caldera island is the change in ownership of the most historic club of the island. The “Enigma” was bought by 3 local  entrepreneurs, Artemis Vlavianou, Marios Galanos and Stavros  who invested in the island. At the same time Russian businessmen, through their Greek representatives, buying real estate-fillets. It was not long ago with the information they want Russian Croesus Evgeny Kasperski give 4.3 million euro for buying a property in Fira on the Caldera area and the shapes in the restaurant along with three luxury suites. The same property people from Santorini say that previously was negotiating from Greek celebrities Demis Nikolaidis and Despina Vandi, but they didn’t manage to close the deal.

Oia with the incredible Caldera observed intense building activity, Shops are renovated, others are purchased by most to be almost ready for the summer season. Interested entrepreneurs besides paying rent ranging from 50,000 euros per season up to 65,000 for space 45-60 sq.m., they need to calculate the “cost of air” that starts from 200,000 and reaches even 1 million to get the rights to rent the place.

At Oia there is only a  specific number of stores, that makes the potential new tenants to offer as high they can to get the remaining stores.

However, most transactions are made under the table so that the tenant can accomplish price reduction while the landlord to avoid as much as he can the Greek Ministry of Finance.

According to lawyer George Koskinas , great demand from the potential investors have except Oia,  the Imerovigli and Firostefani. Fira always maintain the prestige of the center.
Truth is that Santorini lives a crescendo of business that is expected to peak in the next few days ahead of the summer season. 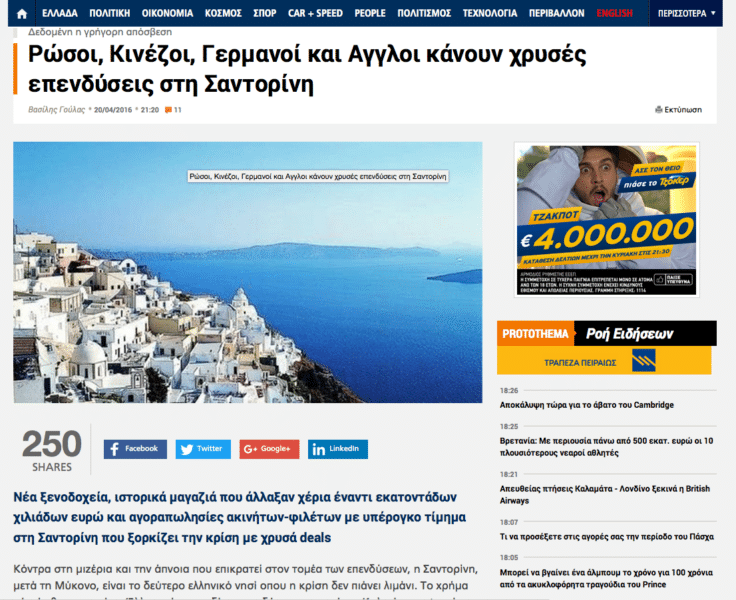 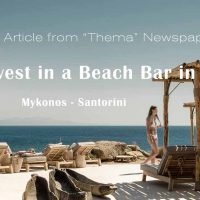